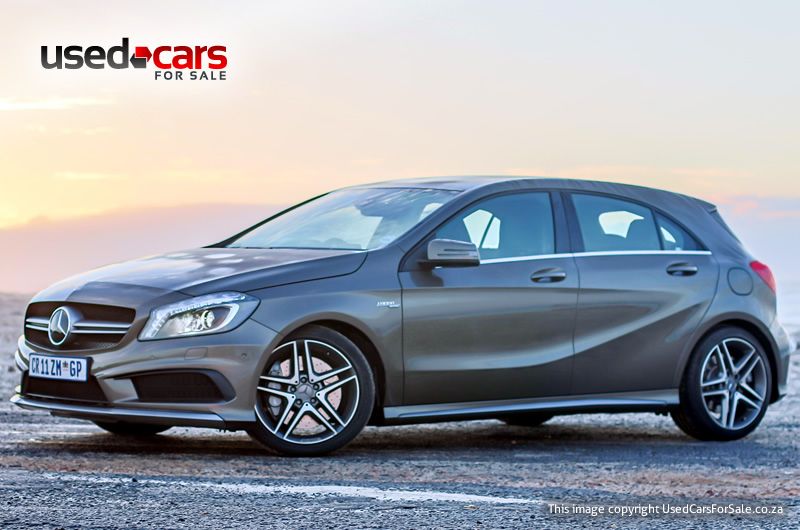 Hot hatches have started to become a thing. Every manufacturer is pushing for a bit of the lime light, and there is no shortage of hot hatches (and small sedans) that deliver north of 200kW.

About a year ago, the Stuttgart, Germany-based Mercedes-Benz unveiled their second generation A-Class, which is a fairly dramatic departure from the previous model, which is now more reminiscent of the B-Class.

Not being content with the new A-Class range, Mercedes drew a line in the sand, and decided to build the most powerful 4-cylinder engine in production. Then they decided to put it in the A45 AMG. That’s 245kW out of a 2.0-litre 4 Cylinder.

So what does 245kW out of a 2.0-litre feel like? Pretty awesome! A small engine, tightly wound with turbos will deliver a very sensitive throttle response. On top of that, add the automatic low down torque, and you have the perfect combination to deliver instant power with just the slightest squeeze of the throttle.

Mercedes have equipped the A45 AMG with All-Wheel-Drive which they call 4-Matic. Handling in the A45 AMG is pretty good, with the AWD system being a big contributor. Also, there is a bit of understeer when entering a corner too quickly, like with most AWD cars. So trust me when I say this stuff get’s addictive. There is a downside to all this fun that can be had however, and that is the car's fuel economy, which is funny because its “little brother”, the Mercedes-Benz A200 CDI featured as the 10th most fuel efficient car in 2014.

Like with most other cars, the economy is directly proportional to the weight of your right foot and the Merc A45 AMG is no different. The German hatchback comes equipped with a range gauge which tells you how far you can still drive on your tank of fuel. This gauge drops quite rapidly when you’re pushing hard, and then climbs again when you drive like a normal person. It’s the only car that I’ve ever driven that quite literally “makes” petrol when you drive.

Inside you’ll find everything you’ve come to expect from a R500k hot hatch. Electronics everywhere, and all controlled through an oddly mounted LCD screen on the dash.

An electronic park brake also features in the A45 AMG, with the button residing behind a really cool little gear shifter.

Under the hood, there is a whole bunch of stuff going on too. Extracting this much power out of a small engine takes some doing, and the boys in the R&D department have done a good job.

We’ve driven many hot hatches, Golf R, Audi S3, M135i, Subaru WRX, and on and on and on, and almost all of them suffer from the same problem. In order to get the handling right you have to stiffen the suspension. They all have hard rides, harder than most people would want on a day to day vehicle. Comfort is at a premium, but the reward is excellent handing and performance – all of which the A45 AMG gives you.

The brilliant thing about hot hatches is that they’re still 4-door cars with a functional boot. Which I suspect is why they’ve become so popular. The A45 AMG is no exception. Rear leg room and head room is more than sufficient for an adult or two, and the boot can hold a set of golf clubs. Although, if you drive an A45 AMG you’re probably not the golfing type.

The A45 AMG ticks all the boxes for a performance hot hatch. Its all-wheel-drive comes with loads of tech, brilliant acceleration, uses all your petrol, and looks better than the rest of the range. There are lots of little red details all around the car that really set it apart from the rest of the A-Class range, and that’s a key part of owning the A45 AMG instead of the others.

Inside there are some cool details, like the star-spoked air vents. What seems to be a trend with Mercedes is mounting the LCD on the dashboard rather than in the dashboard, and that’s the case with the A45 AMG too.

The A45 AMG makes the ultira premium AMG more attainable. Previously AMG’s started with the C63, and they we’ve always been more pricey. Introducing an AMG at this price point is a clever move by Mercedes, and you can bet your bottom dollar that there will be a lot of them on the road.